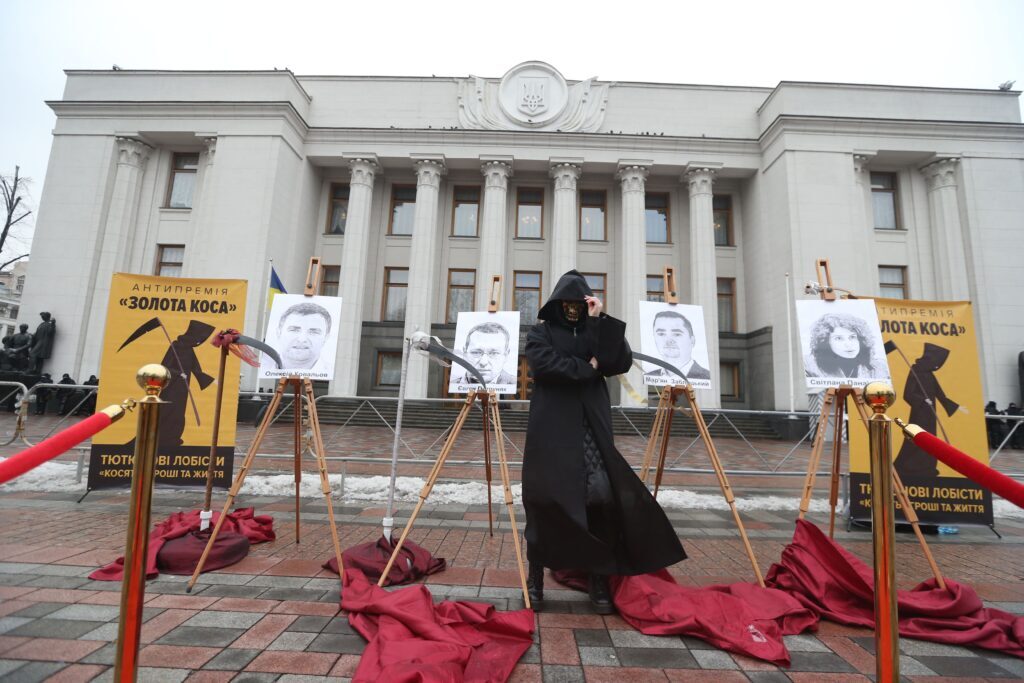 On December 15, Life launched the Golden Scythe Award for tobacco lobbyists within the Parliament and the Golden Brake Award for government members. This is the fifth time that this ceremony recognizes those politicians who have protected multinationals tobacco companies’ interests and blocked public health initiatives. Tobacco lobbyists within the Parliament and Government who use their influence to protect the tobacco industry’s interest are also responsible for “cutting down human lives” and undermining public health. 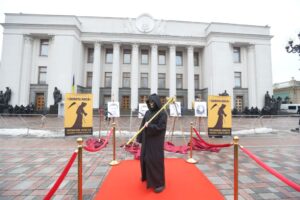 The winners of the Golden Scythe Award 2020 were announced on Constitution Square near the Parliament of Ukraine. For defending the tobacco industry’s interest to the detriment of the public health, the MP of Ukraine, Ms. Maryan Zablotskyy, received the Golden Scythe award, Mr. Yevhen Petrunyak the Silver Scythe, and Mr. Oleksiy Kovaliov the Bronze Scythe. 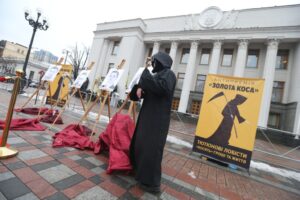 Ms. SvitlanaPanaiotidi, Deputy Minister of Economic Development, Trade and Agriculture of Ukraine, receiveda special award prize, the Golden Brake, which is awarded to a government representative.

Why the scythe? Because, whereas on the one hand, by promoting the interests of the tobacco industry, the politician “harvest” money, on the other hand, he or she aids the tobacco industry to harvest the lives of the Ukrainian citizens. How were the winners selected? A jury monitored and analyzed politicians’ actions that protected tobacco companies’ business, such as the registration of draft laws, speeches, letters, appeals, voting, tobacco industry associates’ presence, etc. The jury gave each action a score and then summed up all the points to develop a final score to determine the winners. “The Golden Scythe Award   2020” considers actions nominees have undertaken since the new Parliament’s election (June 2019 – October 2020).

Ukraine and 180 other countries have ratified the WHO Framework Convention on Tobacco Control. Therefore, they have committed themselves to comply with the Convention, particularly in counteracting tobacco companies’ interference and those acting on their behalf, by attempting to affect the design and implementation of tobacco control policies.

Mr. Maryan Zablotskyy – the winner of the Golden Scythe 2020, as a member of the Verkhovna Rada Committee on Finance, Tax and Customs Policy, presented the draft law № 4101-2 on 10/01/2020. The bill includes provisions to postpone – from January 2021 to January 2022 – introducing excise duties on Heated Tobacco Products (HTP) and cigars at the same level as cigarettes. Had this delay of the excise tax been approved, the State Budget’s estimated losses would have been more than UAH 4 billion per year. In the tobacco industry’s interest, Ms. Zablotskyy has registered alternative draft laws №2813-2 to block and postpone new comprehensive anti-tobacco regulations. 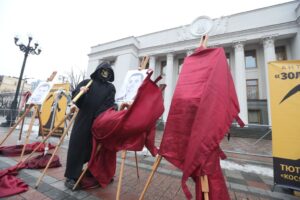 Mr. Yevhen Petrunyak – the silver medalist of the Golden Scythe Award 2020, is a member of the Committee on Taxation and Customs Policy. He initiated an amendment to bills №1210 and №1209, which successfully postponed six months (until 01.01.2021) the taxation of e-cigarettes’ liquids and equating the tax rate of cigarillos and HTPs to the one on cigarettes. According to the Finance Minister, the State Budget didn’t collect UAH 1.5 billion due to the delay. Yevhen Petrunyak was a co-author (together with Maryan Zablockyy) of the draft law №2813-2. This bill aimed to block a comprehensive anti-tobacco registered by the members of the Health Committee. Bill №2813 – the one presented by the Health Committee – bans any advertising and sale to minors of HTPs. Petrunyak’s bill, furthermore, would allow products like IQOS (PMI HTP) and GLO (BAT HTP) to be smoked in public places (schools, hospitals, kindergartens, universities, playgrounds, public transports) and would exclude HTPs and e-cigarettes from the advertising display ban of tobacco products at points of sale (shops, kiosks, supermarkets, etc.). 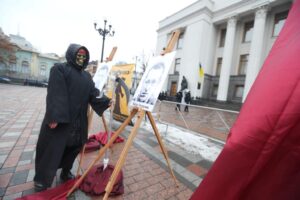 Mr. Oleksii Kovaliov – is the bronze winner of the Golden Scythe 2020. He is the author of several bills related to the production and sale of tobacco products that seek to protect the tobacco industry’s interest. Mr. Kovaliov’s assistant is Valentyna Khomenko – General Director of the Ukrainian Association of Tobacco Producers “Ukrtyutyun” (the founders – transnational tobacco corporations), which further confirms that Mr. Kovaliov represents the interests of companies selling tobacco products. 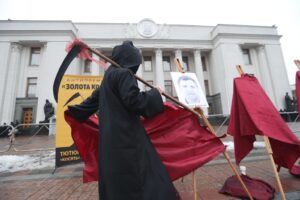 Ms. Svitlana Panaiotidi – Deputy Minister for Economic Development, Trade and Agriculture and Trade Representative of Ukraine. She is the winner in the category “The Golden Brake.” Ms. Svitlana Panaiotidi sponsored the decision of the Cabinet of Ministers of Ukraine to create the National Tobacco Distribution Operator, which legalizes and regulates the monopoly of the tobacco distribution of “Tedis Ukraine.” All tobacco manufacturers/importers will now be required by law to sell their products for distribution only to “Tedis Ukraine.” Before that, the Antitrust Committee of Ukraine imposed a fine of UAH 6.5 billion to “Tedis Ukraine” and all tobacco corporations for joining a cartel to monopolize the distribution of tobacco products. 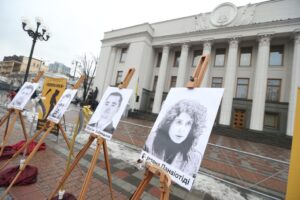 Denis Denisenko – Executive Director of the Reanimation Package of Reforms