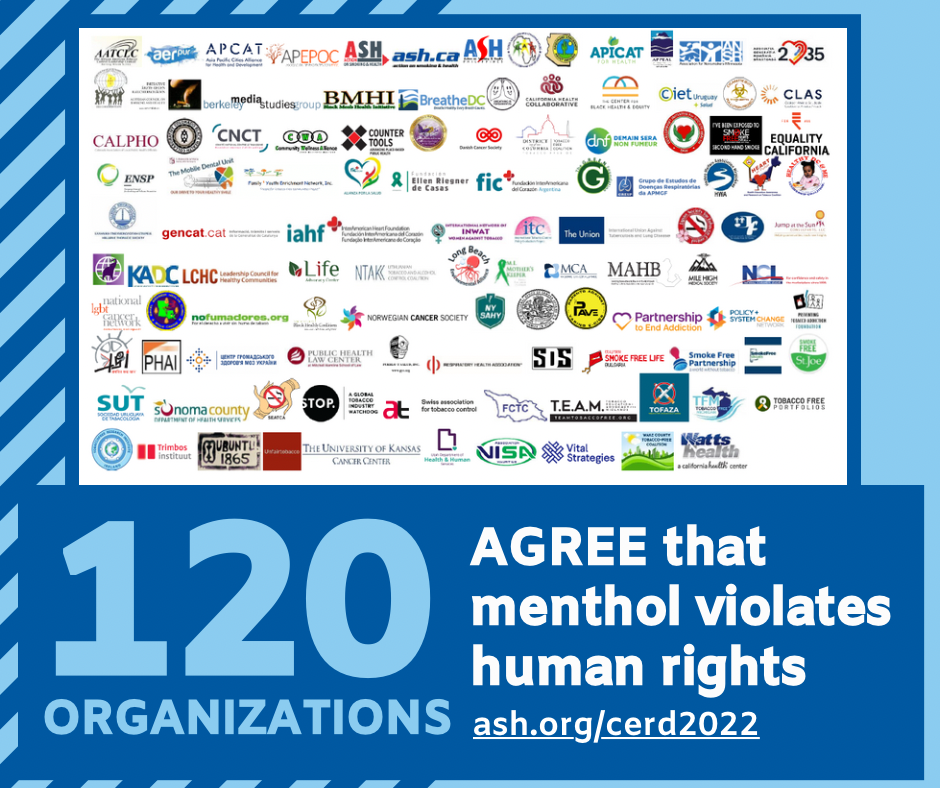 Washington, DC – August 9, 2022 – Action on Smoking and Health (ASH), the African American Tobacco Control Leadership Council (AATCLC), and the DC Tobacco-Free Coalition led 120 organizations in calling on the international human rights body, the Committee on the Elimination of Racial Discrimination (CERD), to ask the United States to protect all Americans from menthol and in turn protect all Americans’ right to health.

The United States is due to report on its progress protecting all Americans’ right to be free from racial discrimination August 11 and 12, 2022 at a hearing by the UN’s International Convention on the Elimination of all forms of Racial Discrimination (CERD).

Because the U.S. has ratified CERD, this global treaty functions as U.S. law. 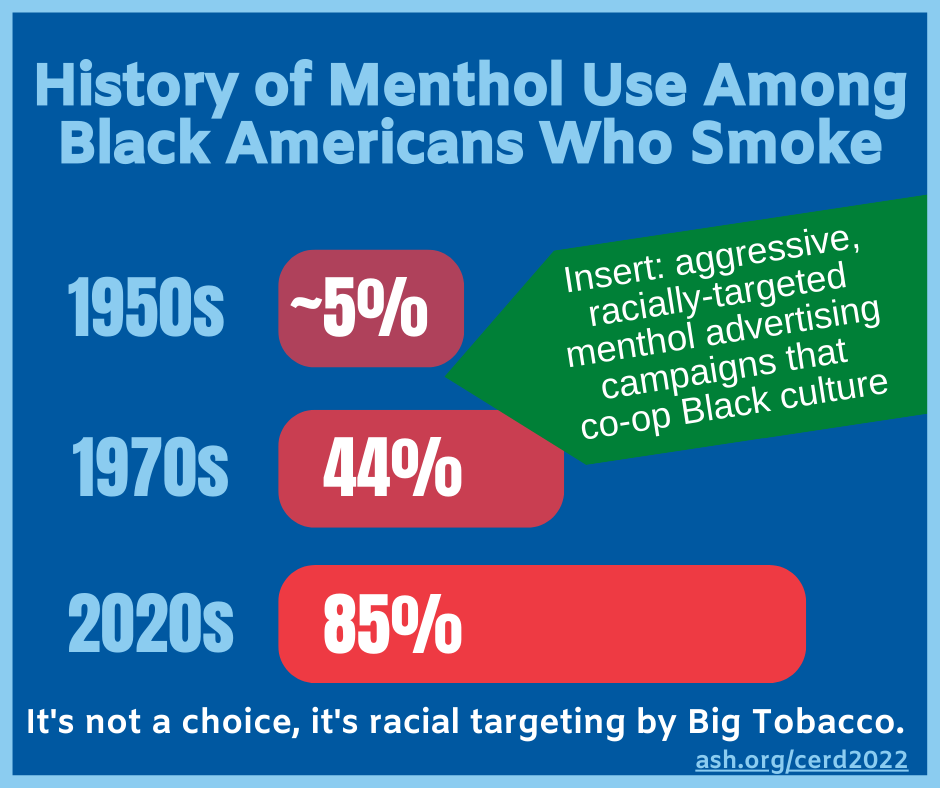 CERD includes requirements to ensure that all people have the right to public health. Tobacco violates numerous human rights, but most notably, the right to health.

Nearly 9 in 10 (88.5%) of African Americans ages 12 and older who smoke use menthol cigarettes as a result of targeted advertisements that misappropriate the Black community’s culture, dreams, experiences, and icons to hook them on deadly products.

Studies have shown that predominantly Black communities across the country have more advertising and cheaper prices for menthol cigarettes. In Washington, DC specifically, researchers found that stores in predominantly Black neighborhoods were up to 10 times more likely to display tobacco advertisements inside and outside than retailers in areas with fewer Black residents. 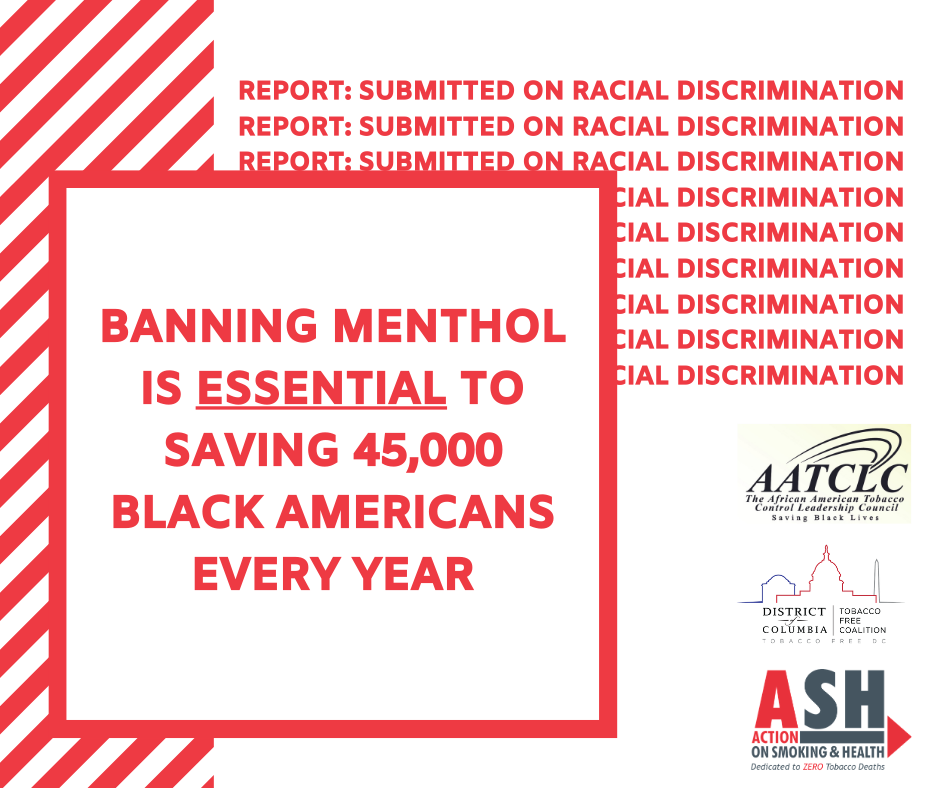 As a result of these blatant human rights violations, 120 organizations are asking CERD to recommend the U.S. take immediate action to remove menthol from all tobacco products.

While the U.S. Food and Drug Administration (FDA) has proposed a rule to remove menthol as a characterizing flavor in tobacco products, that process is likely to take a few years. A formal recommendation from CERD to uphold the requirements the U.S. has already agreed to by ratifying the treaty could offer the needed international pressure to streamline the rule-making process, withstand the overwhelming tobacco industry infiltration attempts, and result in a strong rule to remove menthol and protect African Americans from the tobacco industry.

ACTION ON SMOKING AND HEALTH
Founded in 1967, Action on Smoking and Health (ASH) is America’s oldest anti-tobacco organization, dedicated to a world with ZERO tobacco deaths. Because tobacco is the leading cause of preventable death worldwide, ASH supports bold solutions proportionate to the magnitude of the problem. https://ash.org

THE AFRICAN AMERICAN TOBACCO CONTROL LEADERSHIP COUNCIL (AATCLC)
The AATCLC was formed to educate the public about the effects of tobacco on the Black American and African Immigrant populations, the tobacco industry’s predatory marketing tactics and the need to regulate menthol and all flavored tobacco product. To more effectively reach and save Black lives, the AATCLC partners with community stakeholders and public serving agencies to inform and direct tobacco control policies, practices and priorities. https://www.savingblacklives.org

THE DC TOBACCO FREE COALITION
The District of Columbia Tobacco Free Coalition is an alliance of Washington, DC organizations and individual partners with a mission to improve the health of the District of Columbia residents by decreasing the morbidity and mortality associated with tobacco use and exposure through education, public policy, and advocacy using culturally and linguistically competent approaches. https://www.dctfc.org