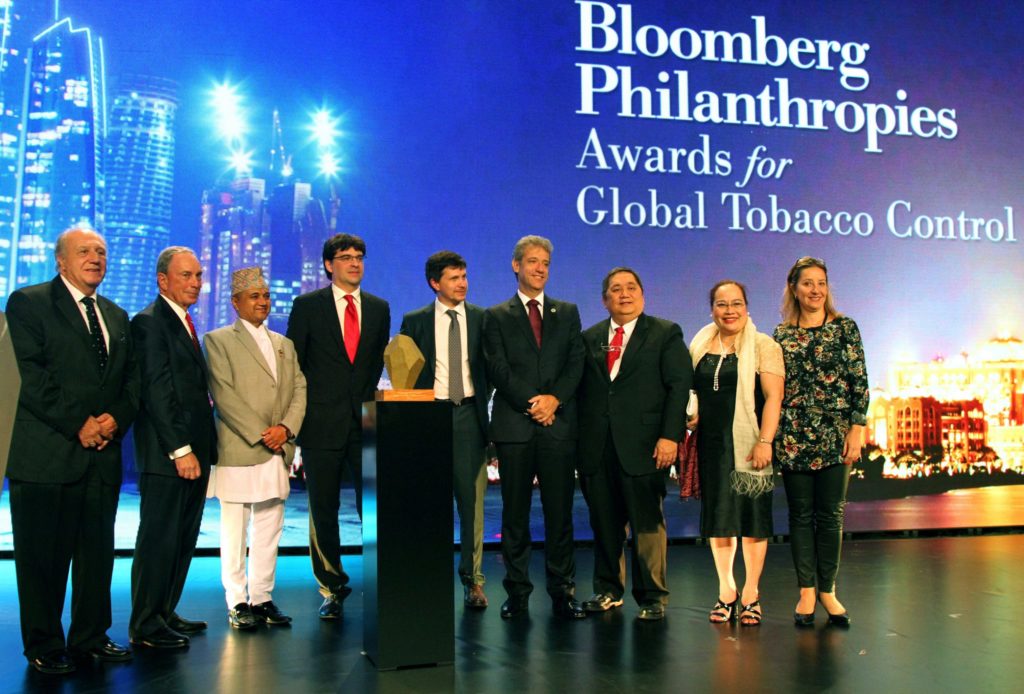 Government and non-governmental organizations from Brazil, Nepal, Philippines, Russia, Ukraine, and Uruguay awarded for their success in fighting the global tobacco epidemic

Michael R. Bloomberg today announced the winners of the Bloomberg Philanthropies Awards for Global Tobacco Control which celebrate the significant strides made by organizations implementing tobacco control policies in low and middle-income countries. He made the announcement at the 16th World Conference on Tobacco or Health in Abu Dhabi.

“People in every part of the world are doing great work to reduce tobacco use and protect public health, and these awards celebrate some of the very best of those efforts. Every day we’re making more progress – and every step forward means many more lives saved and illnesses prevented,” said Michael R. Bloomberg. “We still have a long way to go, especially in developing countries where tobacco companies are focusing their advertising and trying to obstruct efforts to inform people about the dangers of their products. Each of these honorees has shown great leadership and commitment to this fight, and they set a strong example for others as we continue our work together.”

Each year, nearly 5 million people –14,000 every day – are killed by tobacco, more than are killed by any other single agent. Since 2003, Michael R. Bloomberg has led the fight for tobacco control across the globe starting when he signed the Smoke Free Air Act banning smoking in bars and restaurants in New York City, inspiring many other cities to adopt similar measures. The Bloomberg Initiative to Reduce Tobacco Use works with organizations to implement policies in low and middle-income countries where 80% of tobacco-related deaths occur.

The six chosen honorees highlight the tangible progress being made to control tobacco and represent the effectiveness of the MPOWER method, considered the most effective demand-reduction tobacco control policies. One award will be given in each of the MPOWER categories. MPOWER is a proven theory of tobacco control strategies categories: Monitoring tobacco use and prevention policies;Protecting people from tobacco smoke with smoke-free air legislation; Offering help to quit tobacco use; Warning about the dangers of tobacco with pack labels and mass media, Enforcing bans on tobacco advertising, promotion and sponsorship; and Raising taxes on tobacco.

The 2015 Bloomberg Philanthropies Award winners are:

“We celebrate the impressive work of these organizations and the progress across the world in reducing tobacco use,” said Kelly Henning, M.D., Director of Public Health Programs at Bloomberg Philanthropies. “Their efforts are truly notable as they make tangible progress to save lives.”

Honorees are chosen by a confidential committee of international tobacco control experts and then reviewed by Bloomberg Philanthropies. The Bloomberg Awards for Global Tobacco Control was first hosted in 2009 at the 14th World Health Conference on Tobacco and or Health in Mumbai and then again in 2012 when the 15th Conference was held in Singapore.

In 2009, the four Bloomberg Awards winners were:

In 2012, the Bloomberg Awards winners were:

The award was designed by Mark Handforth, a Miami-based artist widely known for his monumental sculptural installations of public objects, including lampposts, fire hydrants, stop signs, and stars that alter our expectations of everyday urban infrastructure. Handforth’s bold style and unusual artworks reference both pop art and surrealism. His work is in the collections of the Whitney Museum of American Art, the Museum of Contemporary Art in Los Angeles, the Carnegie Museum of Art in Pittsburgh, and the Hessel Museum at Bard College in New York.