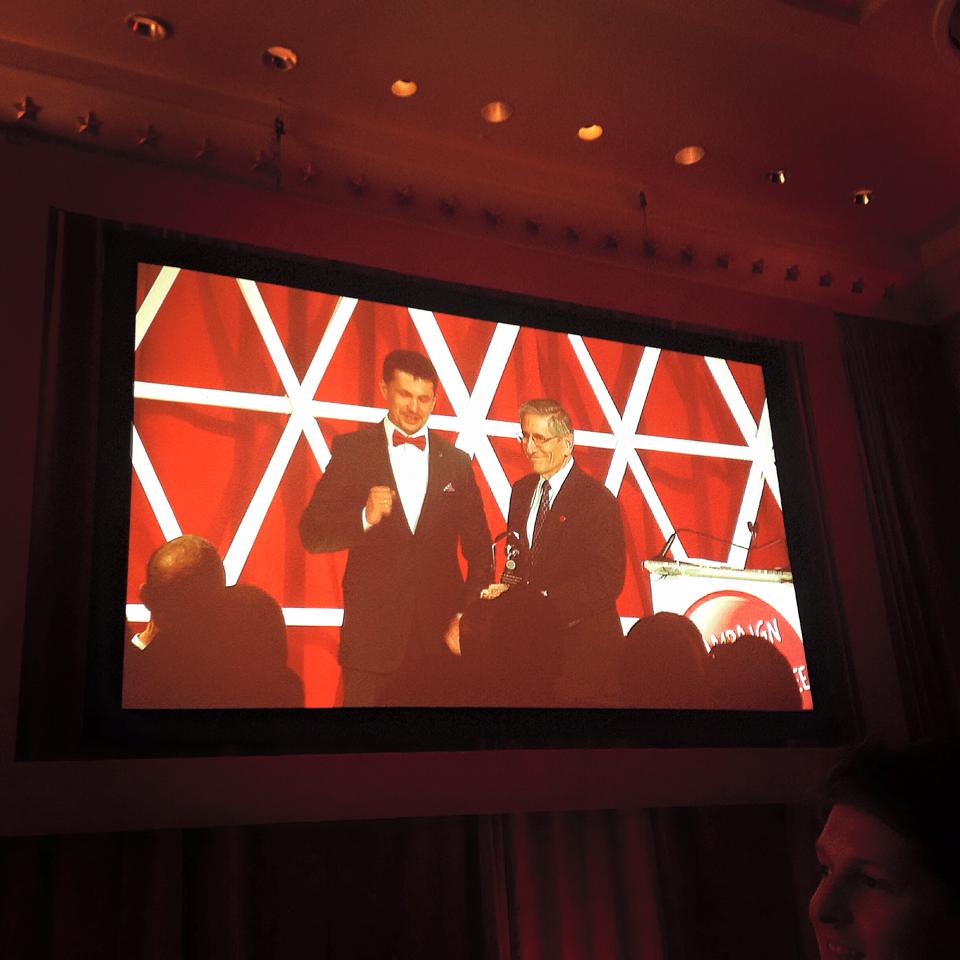 WASHINGTON, D.C. – Andriy Skipalskyi, Chairman of the Board to Life Regional Advocacy Center in Ukraine, has been honored with the 2015 Judy Wilkenfeld Award for International Tobacco Control Excellence in recognition of his visionary leadership in combatting tobacco use in Ukraine. The award was presented to Mr. Skipalskyi at the Campaign for Tobacco-Free Kids annual awards gala held in Washington, D.C. on May 14.

The Wilkenfeld Award was established in honor of Judy Wilkenfeld, a former Tobacco-Free Kids executive who passed away in May 2007. The award recognizes international tobacco control advocates who contribute significantly to reducing tobacco use and inspire others to do the same in the spirit exemplified by Wilkenfeld.

As a direct result of Andriy’s leadership and advocacy efforts, Ukraine has enacted several comprehensive laws aimed at reducing tobacco use, which claims the lives of 115,000 Ukrainians each year. Among these laws, Ukraine now requires 100 percent smoke-free public spaces including restaurants, cafes and bars. With Andriy’s support, Ukraine became the first former-soviet country to adopt graphic warning labels on tobacco products, has enacted a ban on tobacco advertising and also significantly increased tobacco taxes – all measures proven to reduce the devastating toll of tobacco use.

“Progress in combatting tobacco use requires leadership, unwavering commitment and creativity to work in the most difficult of circumstances – no one exemplifies those qualities more than Andriy Skipalskyi,” said Matthew L. Myers, President of the Campaign for Tobacco-Free Kids. “Andriy’s dedication to reducing tobacco use in Ukraine has had a measured impact and makes him a highly deserving recipient of the 2015 Judy Wilkenfeld Award.”

Following tremendous progress in Ukraine, Andriy remains at the forefront of efforts to promote strong public health policies including a call for additional tobacco tax increases, tighter restrictions on smoking and tobacco marketing and stronger warnings on tobacco packages.

“I am honored to have been selected to receive this award and represent my colleagues and my country, which has made significant progress despite trying times,” said Andriy Skipalskyi. “We have seen great progress in Ukraine, and hope to serve as a global example in the fight against tobacco use – to show that despite obstacles, progress in reducing the devastating toll of tobacco is possible.”

The Judy Wilkenfeld Award was established in 2008 by Wilkenfeld’s family and friends to honor a tobacco control advocate each year who is not only an achiever, but someone who works daily to unify the community, mentors and serves as a role model for others, and demonstrates a unique respect for the diversity of colleagues.