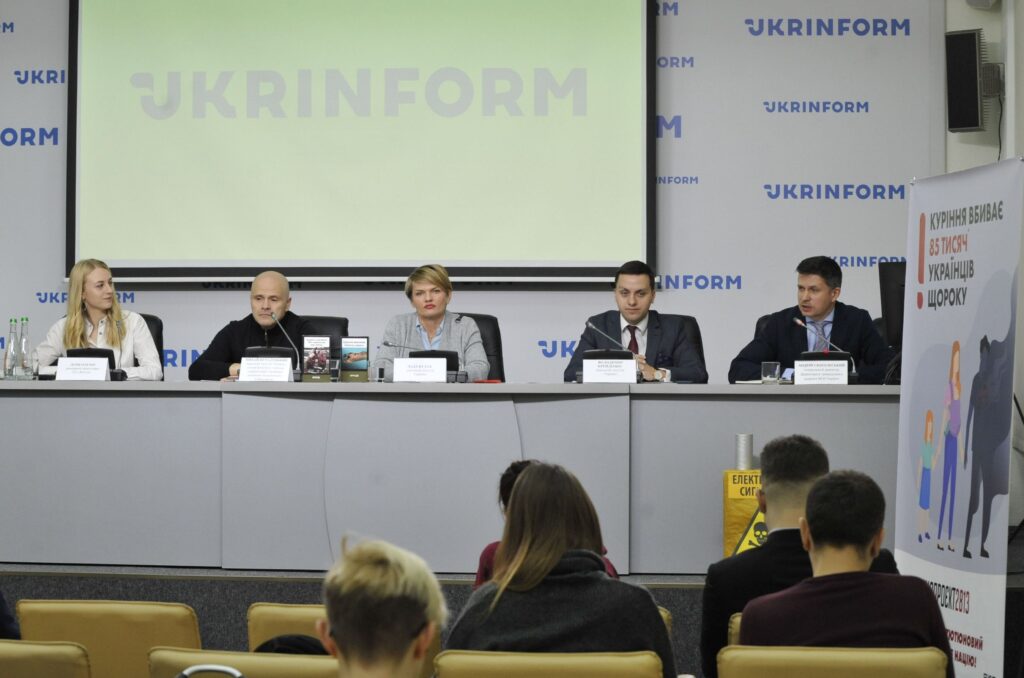 On January 30, Members of Parliament of Ukraine in cooperation with public health experts presented the anti-tobacco draft law #2813 «On Amendments to Certain Laws of Ukraine on the Protection of the Public Health from Harmful Effects of Tobacco» which will become a foundation for a new generation of Ukrainians who are free from tobacco.

The draft law #2813 was drawn up to protect health, especially of children and young people, from smoking and reduce premature morbidity and mortality from noncommunicable diseases.

The draft law is based on best international practices and corresponds to the WHO Framework Convention on Tobacco Control, Directive 2014/40/EU and the United Nations Sustainable Development Goals, in particular Goal №3 «Good Health and Well-being». In addition, the draft law will facilitate the implementation of the National noncommunicable diseases plan to achieve the Sustainable Development Goals.

«Working on this draft law, me and my colleagues, members of the Health Committee, first of all aim to protect health of citizens, especially children and young people, from the deadly harm of tobacco. Our goal is to create the conditions under which children born in Ukraine during the work of the Parliament of the 9th convocation will never start smoking,» Mykhailo Radutsky, Member of Parliament, Chairman of the Committee on Public Health, Medical Assistance and Medical Insurance, said.

So the key norms of the draft law are the following:

ban on sale electronic cigarettes and various tobacco products to young people under 21;

introduction of plain packaging with large pictorial health warnings covering 65% of the pack;

ban on tobacco ads on the Internet.

«Measures proposed by draft law №2813 will gradually lead to improved public health and increased life expectancy in Ukraine. The draft law will promote practical implementation of Ukraine’s international obligations to protect public health from the harmful effects of tobacco. In addition, the document is comprehensive, based on the best global experience, closes all loopholes in the Ukrainian anti-tobacco legislation and meets modern public health requirements,» Lada Bulakh, Member of Parliament, said.

«The implementation of the draft law does not require financial expenses from the State Budget of Ukraine. The draft law will help reduce morbidity and mortality from noncommunicable diseases and save costs from the state budget for medical treatment,» Volodymyr Kreidenko, Member of Parliament, said.

The prevalence of smoking among children and young people is critical today. According to the 2017 Global Youth Tobacco Survey (GYTS), 18.4% of Ukrainian children aged 13-15 are current consumers of electronic cigarettes (22.6% of boys and 14% of girls), and 40% of children in this age group have ever tried electronic smoking cigarettes. In addition, 14.9% of children aged 13-15 (17.8% of boys and 12.1% of girls) are current tobacco users.

«Tobacco use is a major cause of preventable deaths. The World Health Organization estimates that tobacco-related diseases kill more than 8 million people worldwide each year. Tobacco use is one of the main risk factors for noncommunicable diseases (cardiovascular, diabetes, cancer, chronic obstructive pulmonary diseases and mental health disorders), which account for almost 84% of all deaths in Ukraine. 85,000 Ukrainians die from smoking-related illnesses every year. Draft law #2813 will help protect children from smoking and prevent Ukrainians from many illnesses and premature deaths,» Otto Stoyka, Doctor of Medicine and smoking cessation specialist, said.

«The public welcomes the registration of comprehensive anti-tobacco draft law #2813, which will ensure the continued implementation of the WHO Framework Convention on Tobacco Control and its Guidelines. The draft law is in line with the FCTC and provides protection for present and future generations from the devastating effects of tobacco consumption on health, the economy and the environment,» Lilia Olefir, executive director of NGO Life, said.