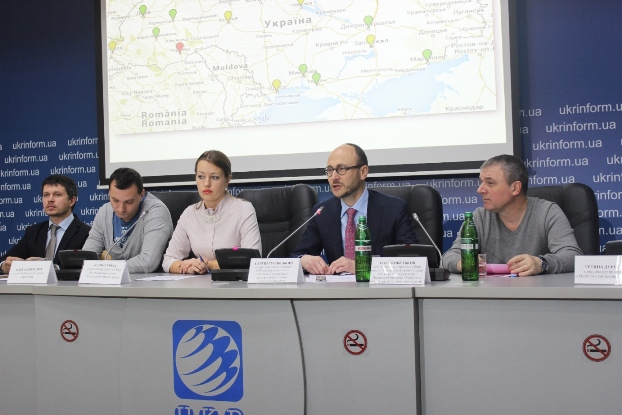 The activists, experts and restaurateurs presented results of a nationwide public monitoring of cafes, bars and restaurants in Kyiv and 19 other Ukrainian cities in terms of the Law of Ukraine № 2899-IV “On measures to prevent and reduce the consumption of tobacco products and their harmful influence on the population health”.

According to the results 89% of visited cafes, bars and restaurants are smoke-free and fully comply with the law. Having regard to the fact, that the government imposed ban on state controlling bodies to carry out inspections in response to consumers appeals in case of their rights violations, the received result could be considered as positive. We recall that the prohibition was introduced by the resolution of Ukrainian Cabinet of Ministers #408 dated 13.09.2014. Consequently, as it could be anticipated, the result appeared to be worse in comparison with the same period in 2013, when the index of the law fulfillment was 2% higher and equaled to 91%.

During November 2014 volunteers and activists visited 925 restaurants (32%), cafes (45%), and bars (23%). Participants vinspected venues mainly in the evening and noted results of monitoring. Activists paid attention also to such indirect proofs of violations as following: the presence of cigarette butts, tobacco smoke and permission of the staff to smoke indoors. Basic conclusions are the following:

1.  The general level of the implementation of the law is still on the high level and equals to 88,6%.

2.  Activists revealed violations in 11,4% of venues (105) particularly in 6,7% of venues visitors could smoke cigarettes and in 4,6% hookahs. Worth mentioning, that smoking of hookahs draws up almost third of the violations.

4. Participants of monitoring applied 56 complaints to inspection, the other complains are still preparing.

6.  Violations have territorial character and are inhomogeneous: the most of violations are in such cities as: Kyiv (24%), Kharkiv (23%) and Chernivtsi (20%); unsatisfied result was received in Odesa (17%), Sumy (16%), Vinnytsya (12%), Zaporizhzhya (11%), Uzhhorod (7%). However, there are cities fulfilling the law without any occasions of violations, namely: Ivano-Frankivsk, Ternopil, Kherson, Chernihiv, Mariupol. Breaches are within 6% in Dnipropetrovs’k, Lutsk, Lviv, Zhytomyr, Mykolaiv, Poltava, Cherkasy.

The smoke free law has brought obvious results: the number of smokers In Ukraine decreased, consequently the level of cardiovascular and respiratory diseases became lower. According to polls and Ukraine State Statistics data, percentage of people having chronic heart disease declined for 12% in cities and for 3% in villages in 2013. The primary morbidity for some respiratory and heart diseases declined for 10-17% in Kyiv. These data should be properly analyzed, nevertheless we could state that the smoke free law undoubtedly improved health of Ukrainians.

There is considerable aggravation of situation concerning the law fulfillment in Kyiv. Nowadays we could declare that a quarter of public catering places ignore the law and allows smoking cigarettes and shisha. Volunteers of “Smoke free Kyiv” project inspected 70 cafes, bars and restaurants in all (10) Kyiv districts. 48 (69%) of these public catering places absolutely comply to the law, however staff of the other 17 (24%) places allowed to smoke, in 5 (7%) venues visitors could smoke on  the territory of closed terraces.

We would like to remind that prohibition of inspections is effective till December 31, 2014. However, from the early beginning of the new year the public will address all complaints again to the respective bodies with the request to inspect all lawbreakers.