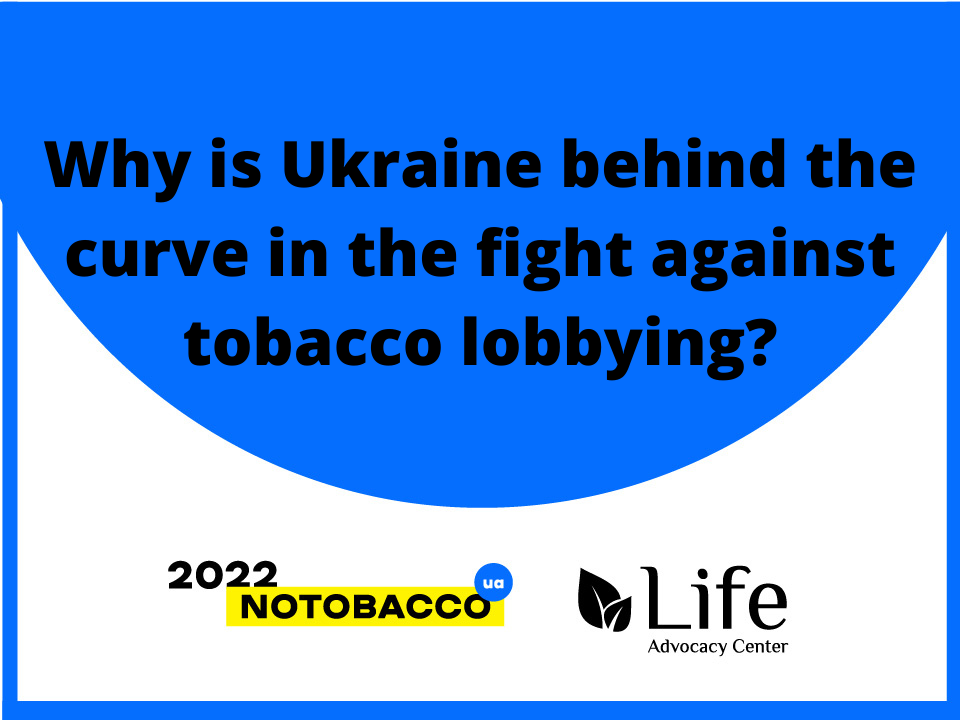 On November 30, the NGO “Life” conducted a presentation of the second Global Tobacco Industry Interference Index in Healthcare Policy. According to this Index Ukraine took 27th place out of 34 places in the ranking, receiving 68 points. This figure is worse than the result of the previous report, which covered 2017-2018 when it was 61 points. According to the research methodology, the higher the score, the stronger the interference of the tobacco industry. The highest scores and, accordingly, the worst situation with the interference of the tobacco industry were in Japan (88 points), Indonesia (82 points), Zambia (78 points), and the lowest scores were received by Brunei Darussalam (14 points), France (27 points), Great Britain (32 points), where governments are more effective in counteracting tobacco companies.

The second Global Tobacco Industry Interference Index covers 57 countries in the period 2018-2019. The research illustrates the level of influence of tobacco companies on government decision-making and how effectively the governments of these 57 states counteract this interference. The report identified cases of obvious pressure from the tobacco industry on health policy-making, as well as non-compliance with the Guiding Principles of Article 5.3 of the WHO Framework Convention on Tobacco Control.

“Tobacco іdustry іnterference is among the main challenges of the effective implementation of anti-tobacco policy in Ukraine. The tools of such interference are, first of all, MPs and government officials. Our task is to cover such cases, in accordance with international agreements, and to emphasize inadmissibility of such practices among those who took the oath to serve the people of Ukraine, not corporations“, said Andriy Skipalsky, chairman of the NGO “Life”.

Of course, positive changes have taken place — the parliament recently passed the Law №466-IX providing for the establishment of an increase in excise tax on heated tobacco products and cigars, as well as taxation of liquids for electronic cigarettes from January 1, 2021. However, these changes are not enough to stop the arbitrariness of tobacco companies in Ukraine once and for all.

“Anti-tobacco legislation should be stricter and control over its implementation should be strengthened. After all, it is unacceptable when, during the global crisis caused by the COVID-19 pandemic, the tobacco industry tries to affect public policy by making charitable donations to fight the coronavirus. Ukraine has made international commitments by ratifying the WHO Framework Convention and has a relevant law banning such tobacco lobbying”, said Vladyslav Zbanatsky, Deputy Director of the Center for Public Health of the Ministry of Health of Ukraine.

“To combat tobacco lobbying, it is necessary to monitor, detect and inform the public about cases when government officials, MPs or civil servants act in favor of the tobacco industry and contrary to government policies aimed at reducing tobacco consumption. In addition, according to the current legislation, all representatives of the tobacco industry are prohibited from participating in the formation of tobacco control policy“, said Serhiy Mytkalyk, Executive Director of the NGO “Anti-Corruption Headquarters”.

The report provides effective tools for protecting public health policy. Among the recommendations are:

For reference: The Global Tobacco Intervention Index was introduced by the Southeast Asia Tobacco Control Alliance as a regional report with the support of the Stop the Tobacco Organizations and Products project of the Bloomberg Philanthropies and as a part of the global publication of the Global Center for Good Governance in Tobacco Control at Tammasat University School of Global Studies.