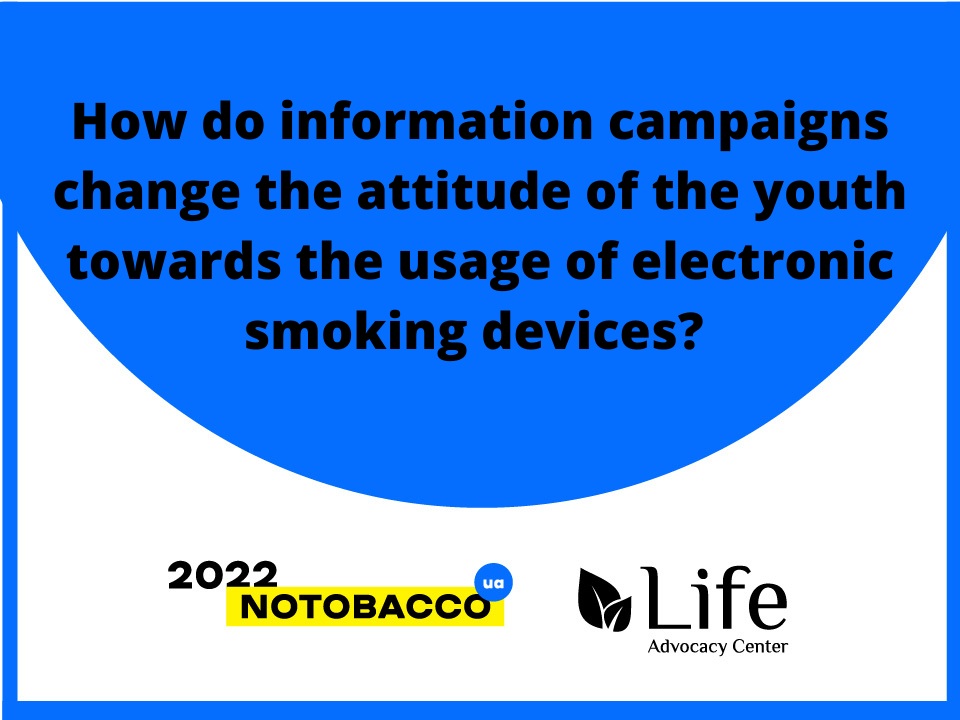 Information campaigns are an effective tool to warn young people about the dangers of electronic smoking devices KIIS research.

On March 31, 2021, a press event organized by the Life NGO was held on the Ukrinform online platform, where the results of the KIIS survey on the effectiveness of the Safe Smoking information campaign and young people’s awareness of the risks of using electronic smoking devices were presented. During November 2020 – January 2021, the NGO “Life” together with the Center for Public Health conducted a national information campaign “Safe smoking does not exist” with the support of the global health organization “Vital Strategies”. Social videos aimed at raising young people’s awareness of the health risks of using electronic smoking devices were broadcast on television, on the Internet, on screens in the subway, and at train stations. Residents of the capital also saw social advertising on the city streets. The total coverage of the campaign is about 25 million people.

The Kyiv International Institute of Sociology in cooperation with the Center for Social Indicators NGO conducted two stages of research among the population of Ukraine aged 18-30: before (in November 2020) and after (in January 2021) the information campaign “Safe smoking does not exist.” The study showed that it really affected the respondents. 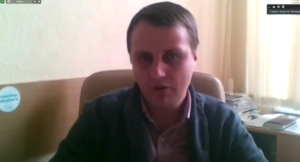 “Information campaigns against electronic tobacco devices are working. Almost 50% of smokers who remembered the advertisement thought about quitting, and 80% of non-smokers believe that it encourages them not to start smoking. The Public Health Center will continue to conduct such information campaigns together with partners and NGOs, “commented Vladislav Zbanatskyi, Deputy Director-General of the Public Health Center.

The results of the survey also showed that how serious is the influence of the tobacco industry on the formation of public opinion on the use of EPA. Amid the declining prestige of smoking, the tobacco industry is finding new ways to once again turn a pernicious addiction into a trend through manipulative approaches and space marketing costs – for example, in the US, tobacco companies spend $23 million a day! Obviously, the new electronic gadgets are nothing more than an attempt to change the very concept of smoking to take it to a new level in the context of technological progress. 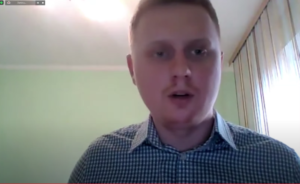 “Tobacco companies are literally going head-to-head, cleverly circumventing the law. As a result, the use of electronic smoking devices is on the rise, especially among young people. Thus, almost half of respondents believe that electronic smoking devices are less harmful than cigarettes, and 37% – that these devices help people quit smoking regular cigarettes,”- said Alexander Shcherbatyuk, researcher, project coordinator at the Kyiv International Institute of Sociology.

However, according to WHO reports published in 2020, there is no reliable evidence that electronic smoking devices are less harmful than regular cigarettes. The WHO also does not recommend the use of ESD when quitting smoking. 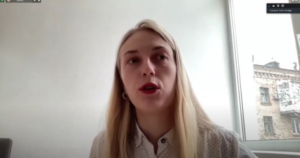 «To really influence the change of knowledge, attitudes and behavior of the population to the use of tobacco products, it is necessary to ensure the constant presence of the necessary information in the media space. In particular, to conduct national anti-tobacco campaigns with the support of the state at least twice a year, as well as to strengthen anti-tobacco legislation», said Lilia Olefir, executive director of the NGO «Life».

Way to change social norms and attitudes towards tobacco and is a fundamental part of a comprehensive tobacco control strategy. Such communication should be enhanced by the introduction of effective non-cost tobacco control measures to protect children and young people from beginning smoking. And such changes are proposed by the draft law № 4358 “On Amendments to Certain Laws of Ukraine on Public Health Protection from the Harmful Effects of Tobacco”. The document is comprehensive, based on world best practices in smoking control and in line with international standards, in particular the WHO Framework Convention on Tobacco Control.

In particular, it proposes:

The draft law № 4358 will save thousands of lives eventually from premature death – at the same time, the implementation of its provisions does not require any expenditures from the State budget. Materials of the information social campaign “Safe smoking does not exist” are available for free distribution with mandatory reference to the Public Health Center.

WHO emphasizes that smokers have a higher risk of becoming infected with COVID-19, as well as a higher risk of complications and death from this disease. Instead, quitting improves lung function, cardiovascular function, and immunity, which gives you a better chance of fighting serious infections such as COVID-19.