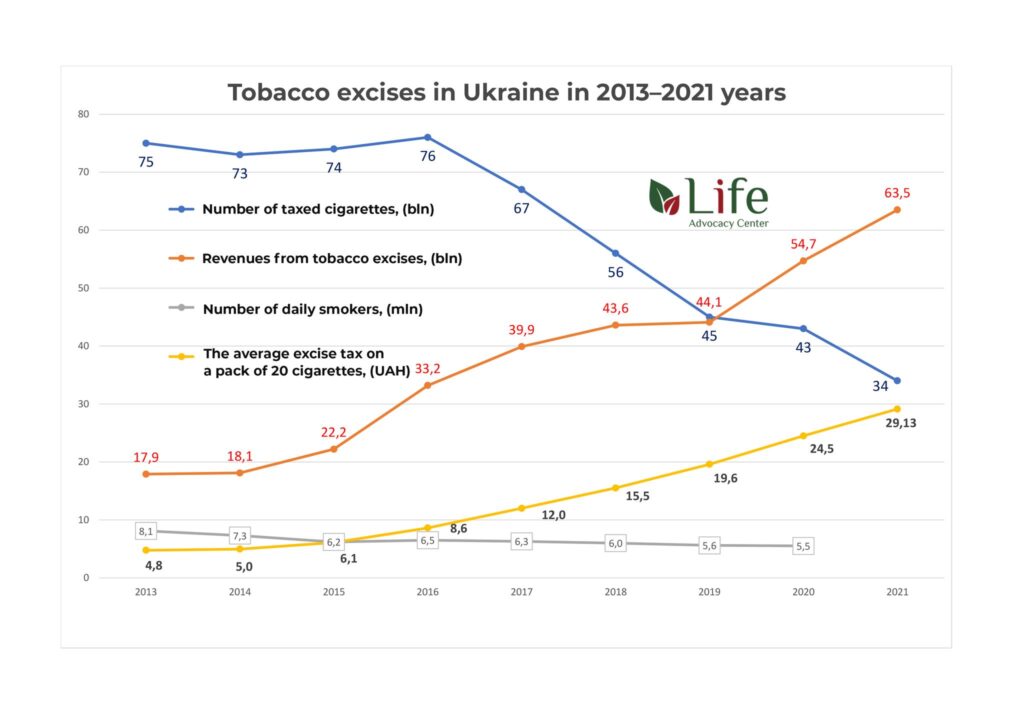 NGO Life in partnership with experts from Kyiv School of Economics  presented an analysis of the results of excise policy in Ukraine.

In 2021, the total excise duty of the State Budget on excise duties on tobacco products increased by 16% and reached UAH 63.5 billion, according to the State Treasury. Such revenue is UAH 8.8 billion higher than in 2020 and exceeded the plan of the Ministry of Finance of Ukraine by UAH 1.6 billion. Additional revenue of UAH 8.8 billion from the excise duty on tobacco products covers 55% of the Government’s expenditures on the medical guarantee program in the case of the COVID19 disease in 2021.

“The Ukrainian Parliament has harmonized excise duties on HTPs and cigarillos to the level of cigarettes and eliminated the tax preference that existed for certain groups of tobacco products to ensure that  market participants would be on the same conditions. An effective decision of the Parliament ensured a sixfold increase in revenue to the State Budget from excise duties on HTPs in 2021. The effectiveness of these measures allows for continued increase to the excise tax on liquids for e-cigarettes”,  — said Danylo Hetmantsev, Chairperson of the Parliament Committee on  Finance, Taxation and Customs Policy.

The growth of revenue from the excise duty on tobacco was achieved due to the harmonization of the excise duty on heated tobacco products (hereinafter — HTPs) and cigarillos to the rate of cigarettes. An important factor in ensuring revenue from tobacco excises was the implementation of the “7-year plan” of 20% annual growth of excise duty rates on tobacco products. According to the Tax Code of Ukraine, the minimum excise tax liability for the payment of excise duty on cigarettes  in2021 was UAH 1,456.33 per 1,000 units, and from 2022 UAH 1,747.6 per 1,000 units and should reach the planned rate of UAH 3,019.85 by 2025.

According to the State Tax Service of Ukraine, excise duties on HTPs have increased by 6 times — from UAH 1.7 billion in 2020 to UAH 10.2 billion in 2021. Such revenue is close to the estimates of the Kyiv School of Economics, which predicted that excise duties fees from HTPs in 2021 could reach UAH 11.3 billion.

“The growth of revenue from excises on tobacco products is the result of effective cooperation between the government and the public in the interests of society. While the Government receives additional resources for the implementation of governmental programs, the affordability of harmful narcotic products, such as tobacco products, is declining, especially for children and the youth”, — noted Dmytro Kypura, executive director of Advocacy Center “Life”.

We remind you that revenues of UAH 10.2 billion from excise duties on HTPs are more than 2 times higher than the amount of excise duty (UAH 4.8 billion) ‘guaranteed’ by tobacco companies and affiliated business associations in 2021 in exchange for a reduction in excise duties on HTPs. If the proposals of tobacco companies were accepted, the State Budget would not have received at least UAH 3 billion in 2021 and tens of billions UAH in the following years. However, the Government, Parliament and the society defended the public interest, which provided billions in tax revenue from products that do not benefit the public and directly harm the health of consumers. Together with the growth effects in tax rates, the reason for the  substantial increase in excise duties was the transition from taxation per kilogram to tax per unit of product. Another factor was the increase in HTPs sales due to unregulated aggressive advertising of these products by tobacco companies, while advertising of tobacco products has been banned in Ukraine since 2012.

“Verkhovna Rada of Ukraine has adopted a comprehensive anti-tobacco law № 1978-IX to protect the health of Ukrainians from the harm of tobacco and nicotine. The law eliminates advertising and marketing activities that may mislead consumers about the consequences of using these products. In addition, we managed to protect the harmonization of excise duties on popular tobacco products to protect children and young people from the availability of tobacco”, — stressed Ukrainian MP Lada Bulakh.

At the same time, the total excise duty on Ukrainian tobacco products (mainly cigarettes) decreased by 2.1% to UAH 51.3 billion. This fact is explained by a number of factors, including the continued reduction in cigarette production and consumption. In 2021, 34 billion cigarettes were sold in Ukraine, which is 18% less than in 2020. A significant factor was the production of tobacco products and the payment of excise tax in 2020 at lower rates that tobacco companies sold to consumers in 2021 after rising excise taxes.

“The adopted Law №466-IX has changed the tax base measurement of cigarillos and HTPs from per kilogram to per unit of goods starting from the beginning of 2021. In addition, the excise tax rate was increased. In order to reduce tax payments at the end of 2020, the tobacco industry produced cigarettes and paid lower excise payments in advance, and in 2021 significantly reduced production and, accordingly, the payment of excise duties. Such tactics of understatement of tax payments by tobacco companies are called “forestalling” and currently in Ukraine there are no effective legislative measures to counter that”, — stated Pavlo Iavorskyi, research associate of Kyiv School of Economics.

«Every year tobacco kills more than 130 000 people in Ukraine, and exacts a tremendous human, health, social and economic cost. This toll is fuelled by the industry, which promotes its products by targeting children, adolescents and other vulnerable populations», — said Dr. Tedros Adhanom Ghebreyesus.

The implementation of the 7-year plan on raising taxes on tobacco together with the increase in the excise tax on heated tobacco products to equal the minimum excise duty on cigarettes. It has led to the formation of an effective tobacco taxation policy in Ukraine, which systematically increases revenues from excise duties on tobacco products and reduces their consumption: this situation contributes to strengthening of the health of Ukrainians and reducing health care costs.

At the same time, the legislative solution requires an understatement of excise duties using the “forestalling” tactic. Another problem that poses a risk to the effective implementation of the tobacco control policy is the illicit trade of tobacco products, which Ukraine needs to ratify and implement as soon as possible and carry out The Protocol to Eliminate Illicit Trade in Tobacco Products (WHO FCTC) developed by the WHO.