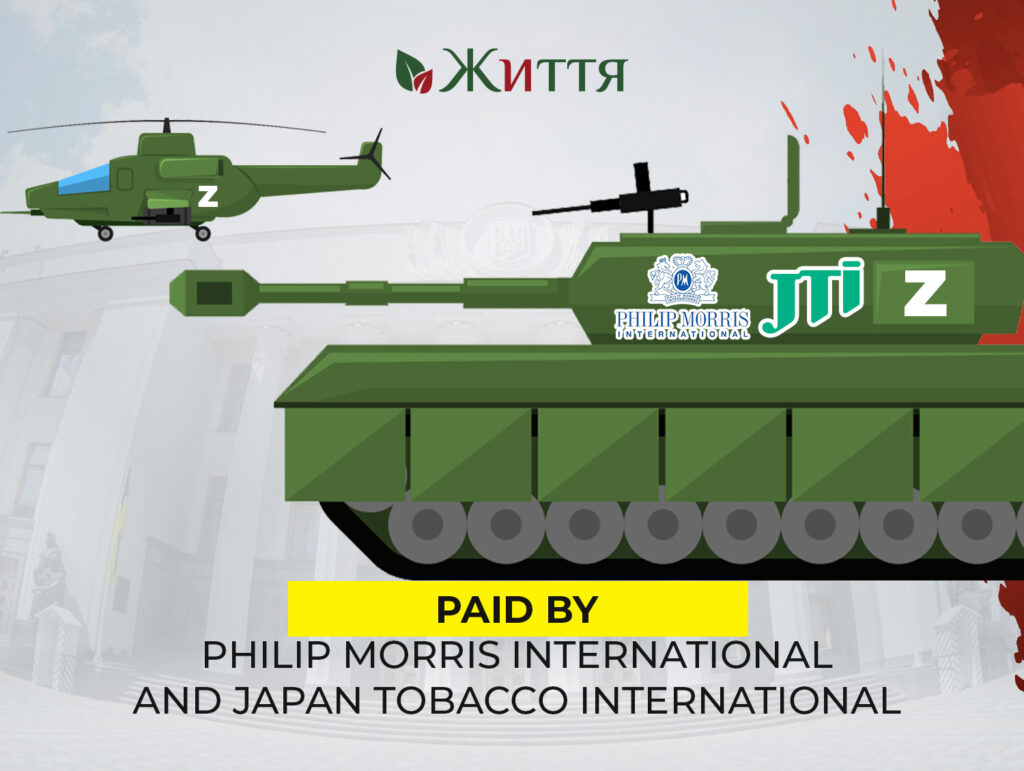 During the three weeks of Russian large-scale invasion of Ukraine, more than 200 international companies have left the market of the aggressor country, as they prefer not to finance the killing of civilians in Ukraine from their taxes. Huge corporations are capable of turning down profits in Russia because the reputation is more valuable than earnings for many of them.

Instead, the tobacco giants continue to operate in Russia and fill the budget of the aggressor state with taxes, which are used to finance the shelling of Ukrainian cities and pay salaries to the occupiers who kill Ukrainians. It shows once again that windfall profits have always been more important to Big Tobacco than human lives.

According to “Economichna Pravda”, the largest foreign companies that remained in Russia, excluding banks, pay about $20 billion annually to the Russian budget. Almost 30% of this amount ($5.73 billion) are owed to tobacco giants. 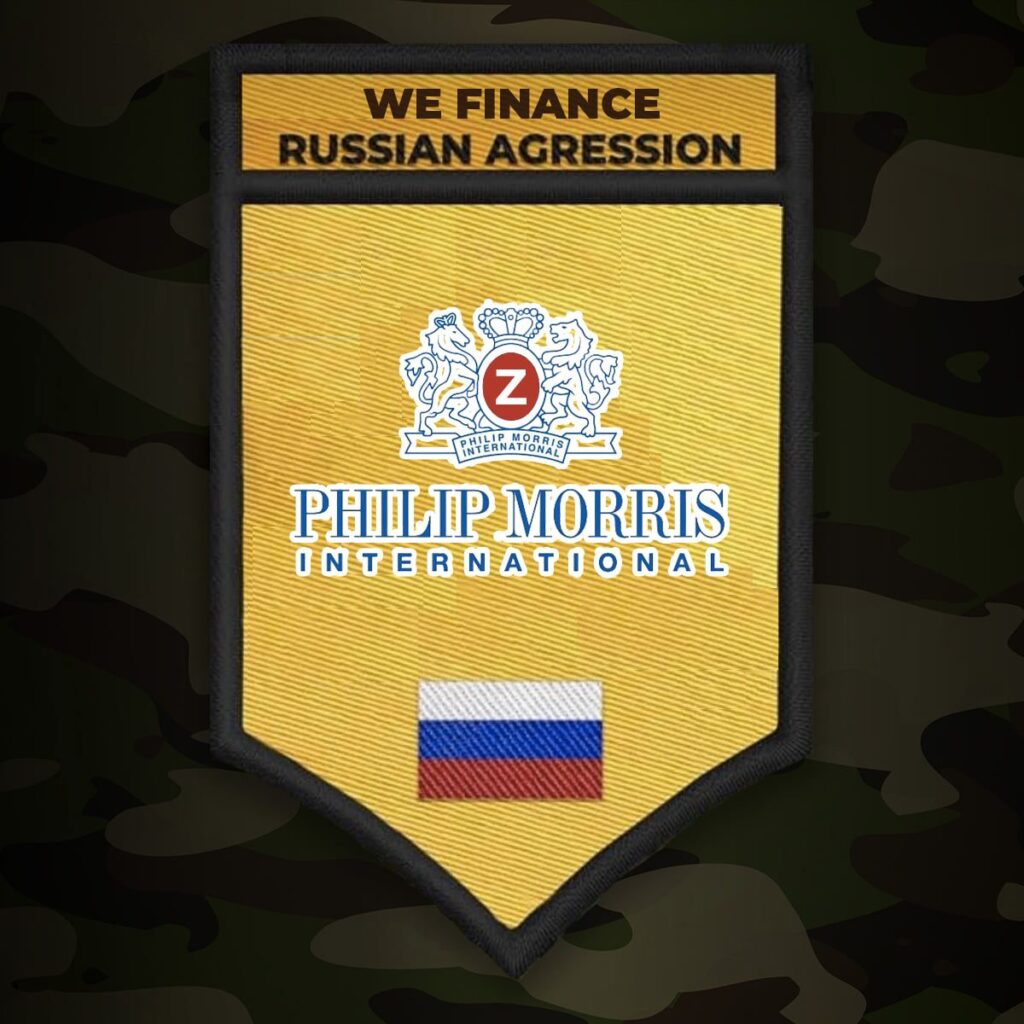 Philip Morris International (PMI) – the tobacco giant, which has created about 4,000 jobs in Russia, is one of the largest taxpayers, continues to work and support the aggressor. In 2020, PMI paid 216 billion rubles ($2.59 billion) to the Russian budget. For more than three weeks, the tobacco company has been publicly ignoring requests to stop working in Russia and therefore supports the actions of Putin’s regime. For their loyalty to the regime, in 2020 Philip Morris received a medal and a diploma from Putin.

Another tobacco giant – Japan Tobacco International (JTI) company produces the biggest share of tobacco products, making up almost 35% of the Russian market. 4500 people work on three Russian factories. The company continues to operate at Russia as well and funds war against peaceful Ukrainian population. During 2020 the company provided 1.4% of the federal budget of Russia Federation income, which is 262 billion rubles, ($3.8 billion). Rudimentary estimates show that in 2020, these two tobacco giants paid 478 billion rubles to the budget of the aggressor state – which is $5.73 billion. 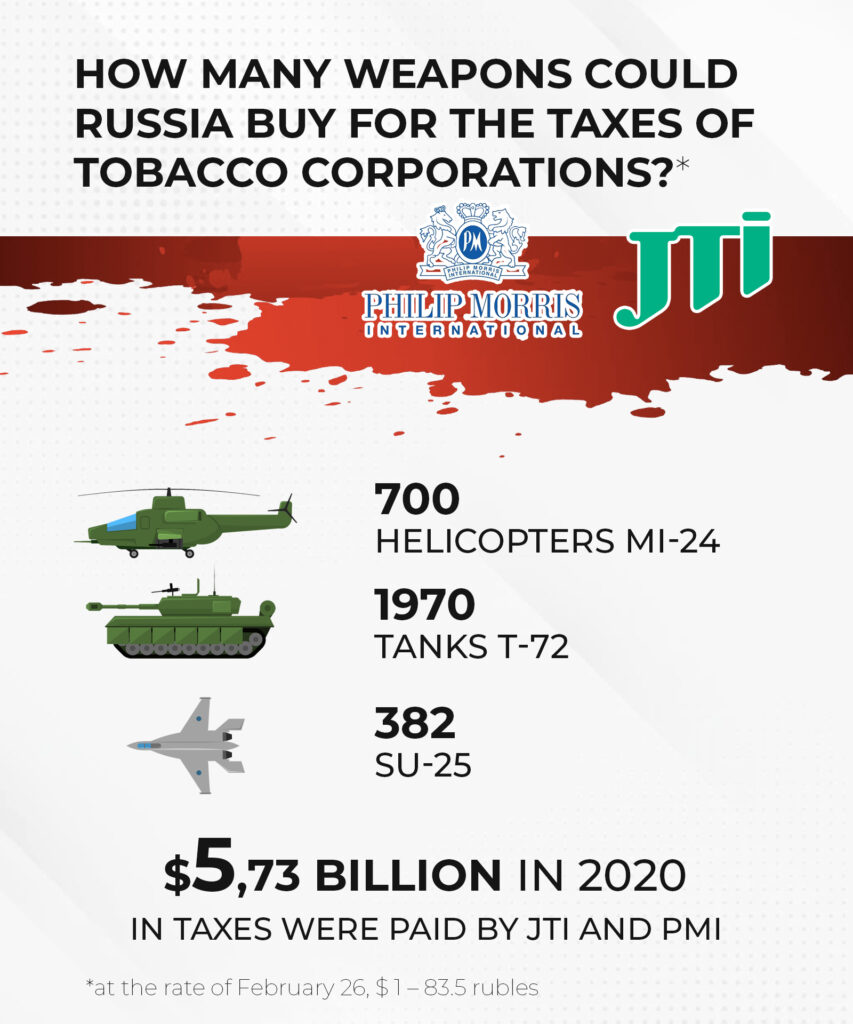 It should be noted that under pressure from the international community, the rest of Big Tobacco left the Russian market. British American Tobacco announced the intention to leave Russia, although 16 days after the start of the war against Ukraine, BAT continued to pay taxes to the aggressor state. And Imperial Tobacco continues work on the grounds that it is looking for buyers for its factory in Russia.

From Feb. 24 to March 17, 2022, the full-scale war of Russia against Ukraine has killed 108 children and left 120 injured, 1 thousand Ukrainian civilians died. The number of refugees from Ukraine reached 3 million people according to UN data.

We call for maximum pressure on Japan Tobacco International (JTI) and Philip Morris International (PMI) companies and to boycott their products. They continue to operate in the aggressor state and pay taxes, with which the Russian government is financing its military actions against Ukraine. The actions of British American Tobacco (BAT) and Imperial Tobacco (IT) need careful attention as well, despite their statements about leaving Russia, they continue to work and pay taxes, thus sponsoring hostility against Ukraine.

We emphasize once again that the use of any tobacco product, regardless of the manufacturer, is harmful to human health and causes diseases that lead to premature death. We wish all Ukrainians to become stronger in this hard time and to give up the use of any tobacco products and electronic smoking devices. We need strong health to fight the enemy.