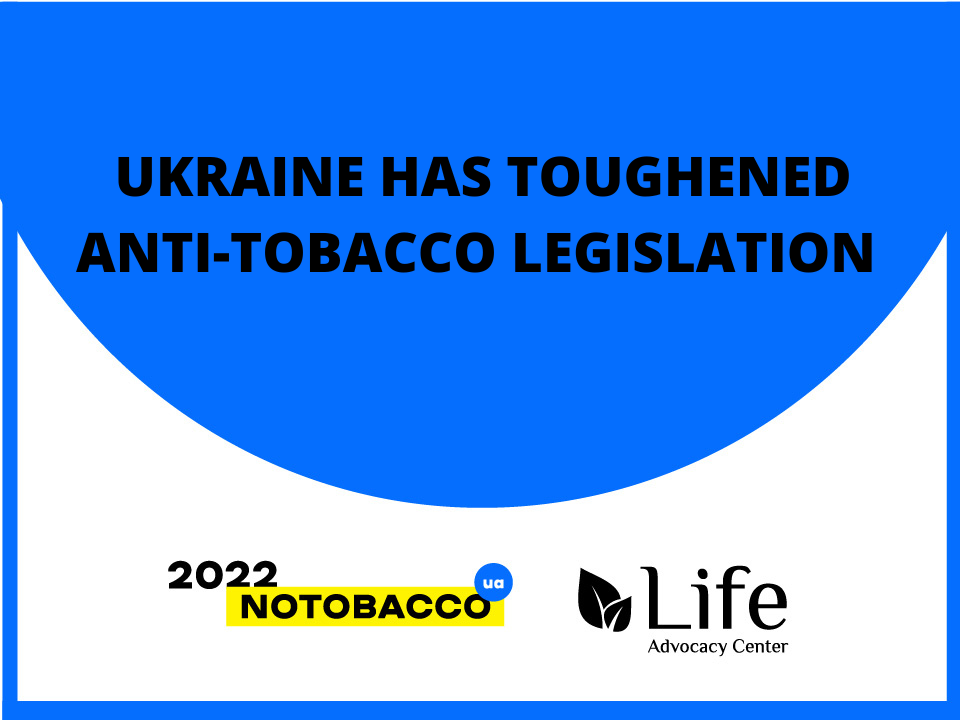 Ukraine’s President on January 6 signed a sweeping new tobacco control law, 1978-IX that will save lives and protect millions of Ukrainians from the deadly harms of tobacco use. After nearly two years of deliberations, the law is a significant victory for the Ukrainian government and public health advocates.

On December 16, the Parliament of Ukraine adopted the so-called anti-tobacco bill № 4358, regulating the market for electronic smoking devices by identifying them with conventional tobacco products. It was supported by 317 deputies.

The document brings Ukrainian anti-tobacco legislation in line with Directive 2014/40 / EU and the WHO Framework Convention on Tobacco Control. It strengthens the protection of Ukrainians, especially children and young people, from the harmful effects of tobacco products.

«The bill will contribute to the achievement of the UN Sustainable Development Goals, in respect of which Ukraine has pledged to reduce the prevalence of smoking to 15% in 2025. Such measures will gradually lead to an improvement in the health of the population and an increase in life expectancy in Ukraine» – indicated in the explanatory note to the document.

The size of the combined medical warning about the dangers of smoking (text and graphics) on packs of tobacco products for smoking will increase from 50% to 65% of their area. The warnings will contain realistic images of smoking-related diseases and will be updated annually. This is the size of graphic images introduced in all countries of the European Union. Also, 30% of the pack will now be a warning on the packaging of e-cigarettes and liquids for them.

Prohibition of the sale of e-cigarettes and liquids used in e-cigarettes, devices for the consumption of tobacco products without their combustion, persons under 18 (previously in Ukraine imposed fines for selling e-cigarettes to children), as well as advertising, sponsorship and promotion of such products. Introduction of labeling requirements for electronic cigarettes, liquids, refill containers and smokeless tobacco products. It is also forbidden to use flavoring additives (fruit, berry, etc.) in any components of tobacco cigarettes and electronic cigarettes. Such products often attract children and young people who do not yet have a bad habit of smoking, giving the false impression of less harmful effects of tobacco use. The law proposes a total ban on Internet advertising, including – in social networks.

The law also expands the list of places where smoking, use, use of tobacco products, electronic cigarettes, refueling containers, heated tobacco products and hookahs are prohibited. The only place where it is proposed to leave the possibility of allocating smoking areas inside the premises are airports. At the same time, town councils will be able to additionally determine smoking-free places within their communities.

The law enters into force 18 months after its publication.

The adoption of the law had the broad support of society and politicians, the Ministry of Health, the Committee on Public Health, Medical Assistance and Medical Insurance, ​and anti-tobacco NGOs. Thanks to this, it was possible to adopt a comprehensive anti-tobacco law and overcome the interference of the tobacco industry.

The World Health Organization (WHO) estimates that more than 8 million people worldwide die from tobacco-related diseases each year. Tobacco use is one of the main risk factors for non-communicable diseases (cardiovascular, diabetes, cancer, chronic obstructive pulmonary disease and mental health disorders), which is the cause of almost 84% of all deaths in Ukraine. More than 40% of Ukrainian men smoke and approximately 130,000 Ukrainians die from tobacco-related diseases each year. Ukraine’s new law is a significant step in curbing this deadly toll and will also align the country’s tobacco control measures with member states of the European Union.