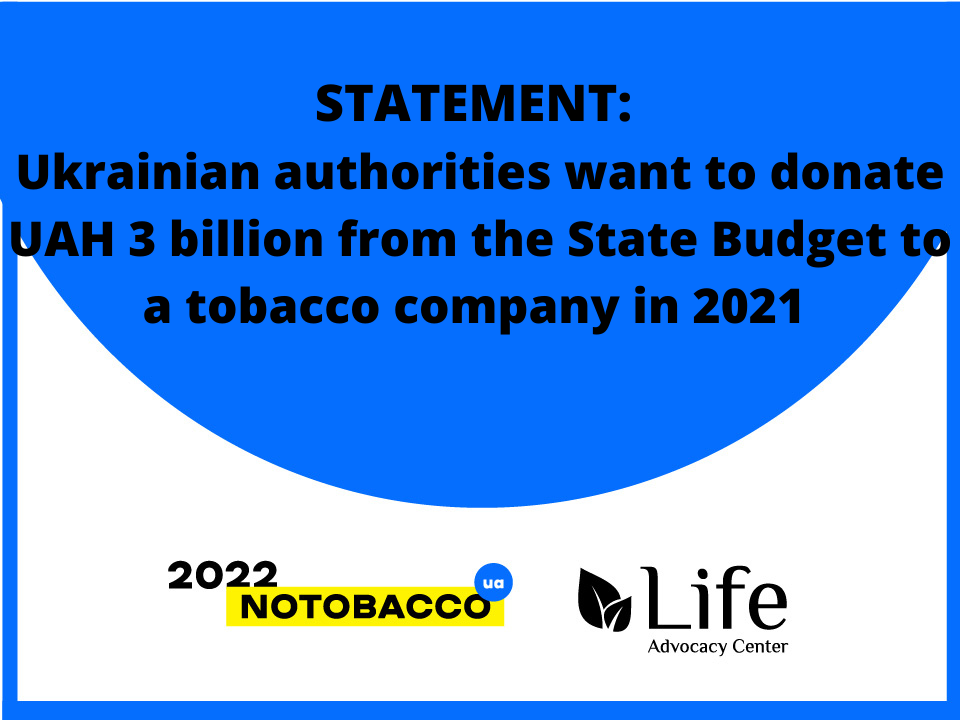 On February 25, 2021, at the request of the People’s Deputy of Ukraine Mr. Arahamiya, the Committee on Finance, Tax and Customs Policy amended №55 in Bill №4278 “On Amendments to the Tax Code of Ukraine (concerning the taxation of goods moved (shipped) in international postal and express items)”, which reduces by 30% the excise tax on cigarettes for IQOS and glo from April 1, 2021. The NGO ‘Life’urges MPs to reject the reduction in the excise tax on IQOS and glo cigarettes provided for in the amendments to Bill 4278. The reduction of the excise tax will lead to the fact that:

The state budget in 2021 will not receive about UAH 3 billion from the excise tax on ESD. Instead, these funds will increase the profits of tobacco companies. According to the calculations of the Kyiv School of Economics and Vox Ukraine, taking into account the preferential tax for IQOS cigarettes and glo, the state budget losses will amount to tens of billions of hryvnias. Reducing the excise tax on ESD will contribute to the affordability of tobacco products for children and increase the prevalence of smoking.

We emphasize that reducing the excise tax on ESD and creating preferences for certain types of tobacco products is contrary to Art.4 of Law №2899-IV, which defines “the priority of health policy in comparison with the financial, tax and corporate interests of economic entities whose activities are related to the tobacco industry.”

According to a KIIS survey, from 2019 to 2020, ESD smoking among young people aged 18-30 has quadrupled. For the first time in 10 years, the dynamics of smoking prevalence among young women and men has resumed in Ukraine. Reducing the excise tax on ESD by 30% will make even more young Ukrainians smokers. Already, one in five Ukrainian children aged 13-15 uses tobacco products or electronic smoking devices. And as a result of tobacco use in Ukraine, 85,000 Ukrainians die every year – that’s 233 people every day! Reducing the excise tax on ESD by 30% contradicts the will of the majority of Ukrainians, according to KIIS polls, which support raising taxes on ESD in order to reduce the prevalence of smoking. Excise duty on ESD is promoted by 30% by some politicians under pressure from the Philip Morris Tobacco Corporation, which is an importer of tobacco products for electric heating for IQOS devices in Ukraine. The intervention and pressure of the tobacco industry on tax policy-making is a gross violation of Article 5.3 of the WHO Framework Convention on Tobacco Control, which has been ratified by Ukraine.

According to a WHO study, there is no reason to tax ESD at a lower rate than cigarettes, because they also contain tobacco, as well as cigarettes. Also today, there is no thorough scientific research that ESD’s are less harmful than conventional tobacco products. They contain more than 20 harmful and potentially harmful chemicals, more than in a regular cigarette.

We demand that the authorities stop selling the health of Ukrainian children and young people in exchange for money from tobacco corporations. We call on the parliament to protect children’s health and to reject the amendments that provide for a 30% reduction in the excise tax on ESD in the draft law №4278 “On Amendments to the Tax Code of Ukraine on Taxation of Goods Moved (Shipped) in International Postal and Express