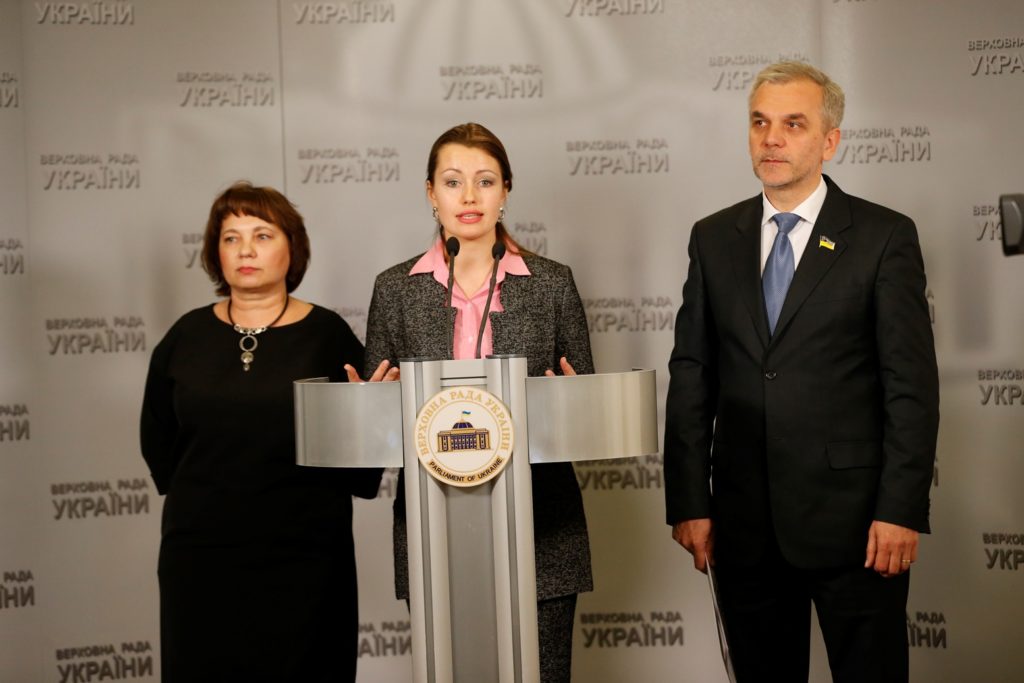 March 15, 2016. Members of Parliament Oleg Musii, Olga Bohomolets, Hanna Hopko and National Officer of the WHO Country Office in Ukraine Natalia Korol held a press-briefing in the Parliament of Ukraine. The event was devoted to the 10th anniversary of the ratification of the World Health Organization Framework Convention on Tobacco Control (WHO FCTC) by Ukraine.

The participants of the press-briefing presented key achievements of Ukraine in the field of tobacco control that had been gained during those 10 years. Moreover, they expressed the necessity in the further effective steps, in particular the legislative ones, towards decrease in smoking prevalence. Also speakers appealed to members of Parliament to support the Draft of the Declaration of Verhovna Rada of Ukraine on the 10th anniversary of WHO FCTC ratification by Ukraine. This document has been signed by 23 MPs who represent different political parties.

“Throughout the decade WHO FCTC became an effective instrument of public health protection, enabling the Parties to the Convention to achieve considerable success in tobacco control. The Framework Convention has united 179 states and covered more than 90% of the global population in order to protect present and future generations from the damaging effects of tobacco consumption and tobacco smoke. This international treaty confirms once again the right of all people for the highest level of health”, – mentioned Natalia Korol, National Officer of the WHO Country Office in Ukraine.

After the WHO FCTC ratification Ukraine implemented a series of important legislative measures targeted to reduce smoking prevalence and save lives.

“In Ukraine we managed to change attitude to smoking from loyal or passively observing to negative. It was done due to ban of all types of tobacco advertising, introduction of graphic health warnings on cigarette packs, clearing most of smoking and public places from tobacco smoke and constant increase in tobacco taxes”, – said Oleg Musii, MP, Head of the Parliament Interfractional  Union on Non-Communicable Diseases.

According to the recent WHO report on global tobacco epidemic, Ukraine is close to the thirtieth place in the world in the smoking prevalence rate. In comparison with 2006, when Ukraine occupied the forth place, this is considered as a great progress. In a year when the WHO FCTC was ratified, over 37% of Ukrainians were daily smokers; however, last surveillance revealed that smoking prevalence among adults decreased to 24% in 2015.

The implemented legislative and enforcement measures were the most effective in the health sphere. Only from the financial prospective, the State Budget has received 9 times more revenues over the last 8 years due to tobacco tax increase: from 2.5 UAH bln in 2007 to 22.2 UAH bln in 2015.

Decline in smoking prevalence became one of the factors of increase in average life expectancy – from 68 years in 2000-2008 to 71 years in 2011-2014.  Therefore, the morbidity rates for asthma, lung diseases and ischemic heart diseases have also decreased.

“The WHO FCTC is the first binding international treaty in the health sphere. Thus, Ukraine as a signee shall fulfill its obligations under this treaty. In particular, Ukraine shall improve its efforts towards comprehensive protection from tobacco smoke, resistance to tobacco industry interference, decrease in tobacco affordability and regulation of the tobacco products ingredients”, – explained Hanna Hopko, MP, Head of the Foreign Affairs Committee.

Despite of Ukrainian achievements in tobacco control, there is still a long way ahead to overcome the tobacco threat. In 2010 Oxford University researchers evaluated that 63,000 people die annually in Ukraine from tobacco related diseases. In 2015 the level of smoking prevalence in Ukraine did not change. It happened because no actions concerning tobacco control were taken in Ukraine in 2015. The enforcement of tobacco control legislation remains weak, while impact of tobacco industry on authorities is strong.

“Most of the tobacco control proposals and measures are initiated and realized by NGOs; moreover, international donors provide funds for tobacco control activities. Ukrainian smokers paid UAH 124 billion to the State Budget for the last 8 years and, therefore, they deserve better medical and consultative help for quitting smoking from the government. There is a strong demand to  establish effective mechanisms of smoking prevention and cessation, also through further enhancement of antitobacco legislation”, – noted Andriy Skipalskii, Head of the Ukrainian Center for Tobacco Control, NGO “Life”.

The government has not spent a penny for the tobacco control programs over the last years, nevertheless, it was exactly Ukrainians who paid tobacco taxes, not tobacco corporations.

Nowadays, Ukrainian authorities have to be responsible regarding the issues of tobacco control legislation improvement; in particular it is necessary to adopt the law, protecting Ukrainians from tobacco, in compliance with the EU requirements. Thus, MPs registered the Draft Law #2820 “On amendments of some Laws of Ukraine on protection of public health from the harmful impact of tobacco products”, that is in full compliance with the Directive 2014/40/EU and the WHO FCTC. The draft law was recommended to the first hearing by the Health Committee of the Parliament of Ukraine.

“The authorities should take responsibility for the people protection from the harmful impact of tobacco and do not counteract tobacco control progressive initiatives. The adoption of the draft law #2820 will help save hundreds of thousands of lives by reducing attractiveness and prevalence of smoking, in particular among children and youth. Human life and health should be the main values of the state policy in all its areas. Our common goal is to care about young generation and build our country on the principle of humanistic economics”, – summarized Olga Bohomolets, MP, Head of the Health Committee.

After press-briefing an exhibition dedicated to the 10th anniversary of the WHO FCTC ratification on the third frool of Ukrainian Parliament. For contacts: Oksana Totovytska,  (063) 261-74-05, (044) 279-6