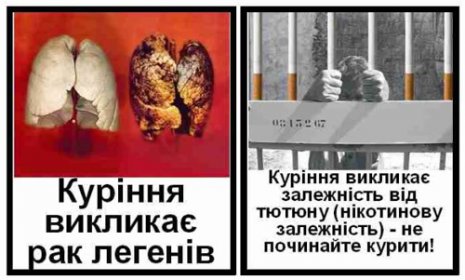 NON- photogenic truth: graphic pictures of the effects of smoking increase the power of text warnings on cigarette packs
Package of cigarettes and its design – is an effective method of advertising a poisoning product. One, who smokes 20 cigarettes per day, looks on a pack more than 7 thousand times a year. Tobacco companies are successfully using the package to create the illusion that cigarettes are not the harmful drug addiction, but a modern, glamorous product. Soon this will be brought to its logical end.
During three years NGO “Life” coordinated a public advocacy campaign in Ukraine aimed at adopting regulations that force tobacco companies place photo illustrations on the cigarette packs, reflecting the “real image” of the diseases caused by smoking cigarettes. And Ukraine could have become the first country on the territory of the former Soviet Union with pictorial warnings labels on the cigarette packs. But…
Yet in 2009, the civil society, healthcare professionals, and Members of Parliament despite the powerful tobacco lobby, have made Verkhovna Rada of Ukraine to adopt the Law № 1512-VI «On Amendments to Certain Legislative Acts of Ukraine to improve the regulation of relations in the field of preventing and reducing tobacco use and its harmful effects on public health. » In the final provisions of the Law deputies obliged the Cabinet of Ministers of Ukraine to approve the list of color pictorial labels that would be part of health warnings on the packaging of tobacco products from the list of those used in European Union within three months from the date of publication of the Law.
However, due to interference of tobacco lobbyists and their influence on the Cabinet of Ministers, neither in 2010 nor in 2011 the pictures did not appear on the packs. Cabinet of Ministers three consecutive times did not approve the Resolution on pictorial warnings labels and that postponed the Law’s official start date. Only under the pressure from the Ukrainian and international community, due to the journalists’ investigations of the tobacco lobbyists in the government, numerous public events involving celebrities we managed to deal with the Government. On January 19th, 2011 the Cabinet of Ministers of Ukraine approved the list of images and icons that will be printed on packs of cigarettes in Ukraine. On March 29th, the text of the Resolution of Cabinet of Ministers № 306 appeared on their website. The pictures that were approved, in particular, will show lungs affected by cancer, a man behind the prison bars made of cigarettes and other effects caused by smoking. Text messages will also be printed below the pictures.
Color pictorial warnings are to appear on packs of cigarettes (https://center-life.org/fotogalereya/dniprovska-rayonna-vistavka-poperedzhuvalnih-zobrazhen) in Ukraine in October 2012, and Ukraine will be the fortieth country in the World to introduce such standards. Experience of other countries shows that the effect of introducing warning images is more significant in the first year, when involvement of new smokers decreases significantly. Such pictures are especially effective for youth and women as being destroying the “glamorous” charm of the packs. Despite the efficiency of photographic warnings, they tend to “burn out because people gradually get used to them. Therefore, NGO “Life” will be actively working on the introduction of more illustrative color warnings in Ukraine and introduction of plain packaging. Only plain packaging can reduce the power of the brand to zero level, and therefore stop to mislead youth.