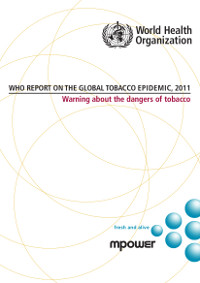 The tobacco epidemic has covered the world and every year takes away nearly five millions of lives. Smoking and tobacco consumption is the biggest threat for public health in the area of noncommunicable diseases. If this trend continues the way it is, in 2025 tobacco will take away six millions of lives every year, and the epidemic will move to third world countries, where 65% of world’s smokers will live at that time. This means that tobacco companies set priorities to expand in poorer countries where they are allowed to so by the governments. At the same time the prevalence of smoking in Europe and North America is decreasing.
Since 2009, Advocacy center “Life” is a key partner of the International organization “Campaign for Tobacco Free Kids” and WHO Country Office in Ukraine in struggling against the tobacco epidemic. Since the moment of creation, “Life” is implementing the national project “Smoke Free Ukraine “, which aim is to reduce smoking prevalence among the Ukrainian population. The main strategic directions of the organization in tobacco control are: 1) increasing excise taxes on tobacco products to increase cigarette prices; 2) the total ban of all forms of advertising of cigarettes and enforcement of the legislation; 3) convert all working and public places into a Smoke Free zone cigarettes and enforcement of the legislation; 4) labeling cigarette packs with larger text and pictorial warning labels; 5) conducting information campaigns on the negative consequences of smoking and change the social acceptance of smoking; 6) countering tobacco industry interference in policy-making in health care sector; 7) the consolidation of public forces, experts and authorities through the development of the Coalition “For a Tobacco Free Ukraine” for effective advocacy.
During the period of its operation Center “Life” successfully implemented most of the strategies proposed by Framework Convention on Tobacco Control (FCTC) that led to system changes in Ukrainian legislation on tobacco control. As the result this led to a significant reduction in smoking prevalence among the adult population of Ukraine in recent years. In 2011 World Health Organization (WHO) published the Third Report on the global tobacco epidemic . http://www.who.int/tobacco/global_report/en According to this report Ukraine moved from the 4th place in the world in the prevalence of smoking to the 29th place. This trend is confirmed by survey data of State Statistics Committee, which proved that smoking prevalence among people older than 12 years decreased from 25.6% in 2008 to 22.4% in 2010, i.e. by 3.2 percentage points, or nearly 13%. In 2005, 62% of men and 17% of women smoked cigarettes on a daily basis. In 2010, these figures represent 45% of men and 9% among women. Reduce of the prevalence of smoking can be certainly considered as one the factors in reducing the death rate observed in Ukraine over the past few years.
The key directions of the organization in the next few years include ensuring the effective implementation of tobacco control legislation that includes but not limited by: total tobacco advertising, sponsorship and promotion law #3778, the law on smoke free public and work places, monitoring the implementation of legislation on warning labels on cigarette packs. Besides Center “Life” will continue the tax increase advocacy campaign and will develop its competence as the leading tobacco control and advocacy NGO in Ukraine.
Поділитися новиною: